My blog has been quiet for the last month because I was on a vacation, where I took a lot of new photos and did some experiments with photo techniques. One of these experiments was long time exposure of moving water. I wanted to try out what is possible without any special equipment like gray filters. 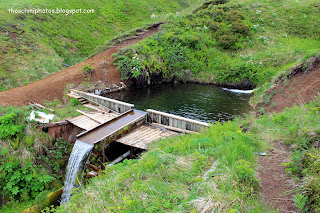 At one of my stops I took a walk up a hill and found this pool. It was built as a fresh water supply for the settlement at the base of that hill. You can see the water pipe under the bridge that runs down to the houses. But what I was interessted in here was the little river filling the pool in the back. I've read about that floating water should be captured with longer exposure times to point out the movement and here was my place for experimenting with this. The place was ideal because of the wooden dam. I could place my camera onto it instead of using a tripod. The dam was not that high and the camera could look just above the water surface. And the distance from the dam to the little waterfall was perfect for a full 55mm focal length.

I used the following camera setting for this experiment: The ISO value was set to lowest value of 100 to get the longest possible exposure times. I switched the camera into Tv mode to manually select the shutter speed and let the camera calculate aperture values automatically. The lens mounted was my EF-S 18-55mm f/3.5-5.6 standard zoom kit lens. I did several photos with shutter speeds from 1 second to 1/100 sec. 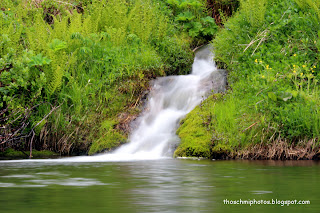 The first photo was shot with a shutter speed of 0.6 seconds. You can see the water floating down the hill like fog. This looks really nice. Even the lake gets blurred a bit by the movement of the waves. This is what I do not like that much here. I would prefer a more clearly water surface. Another negative point here is the aperture value. Due to the long exposure time the camera has calculated a really high aperture value of 36. The small opening in the lens produces a high diffraction and therefore the photo is not that clear. The plants in the back look quite unsharp. Good aperture values are usually between 7 and 11. 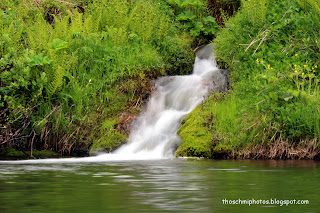 The next photo was taken with a shutter speed of 1/3 second. Looks better now. But the aperture value of 32 is still quite high. The lake gets more clearly now, but the plants are still unsharp. The waterfall still looks foggy but you can see more structure in it now. 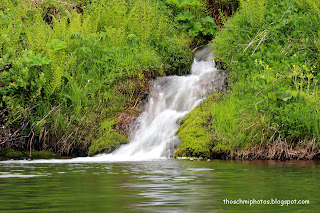 This here is my favourite one. It was shot with a shutter speed of 1/10 second. The camera has calculated an aperture value of 16. This is a quite good value. The plants in the back are clearly sharp now and the lake has a nice clearness as well. The waterfall still looks foggy, which points out its movement. But you can already see the stones it is floating around and over. I like that one. 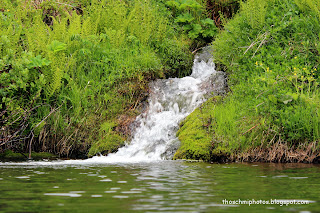 The last photo of this experiement that I want to show was taken with a shutter speed of 1/80 sec. The aperture value here is the lowest possible one of 5.6. This results in a nice depth of field. The foreground runs out of focus and gets a nice focus blur. But the waterfall is not beautiful anymore. It is in a state between motion blur and freeze, too clear for pointing out movement and too blurred to show it in a frozen state.

Doing this experiment was a big fun for me. I have learned that you do not need special filters mandatoryly. And longer exposure times do not always produce better results. The photo that I like most was taken with 1/10 of a second which is not really long time exposure. But it is alway an advantage to take such kind of photos with different shutter speed values and in the end choose the one that looks best.
nature outdoor river water

Douglas said…
Nice article and great example photos. I'm not sure what camera you are using and also not sure if you were using a tripod or not, but you may have forgot to think about a couple other factors in your analysis.
If you were hand holding, obviously camera shake can be a problem at the slower shutter speeds.
If you were using a tripod, then you may want to consider mirror slap/mirror shake for the shots that are slower than 1/10 sec. Mirror shake can be a factor in a very narrow or wide range of shutter speeds depending on the camera and lens combination.
July 11, 2013 at 5:30 PM

Thomas Schmidt said…
Thanks for your comment, Douglas. My camera is a Canon EOS 600D. Just forgot to mention it in the article. I did not use a tripod. Instead I placed the camera on that wodden dam and pressed it down firmly to prevent shakes as best as possible. So it's kind of between a tripod and hand held. For future photos I will keep in mind to activate mirror locking when using slower shutter speeds.
July 11, 2013 at 7:07 PM 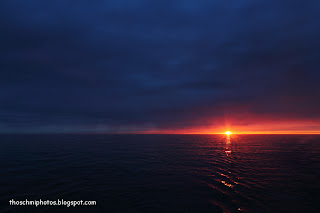 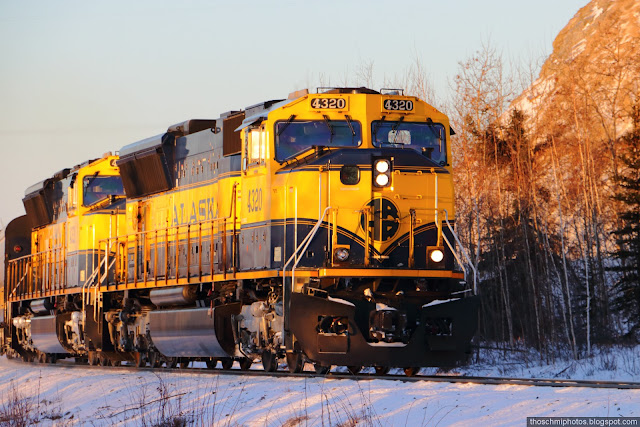 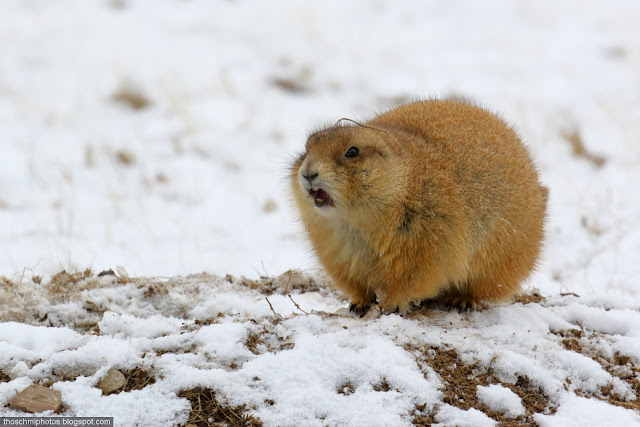